I used to be a runner. I’ve written about it here, talking about how running became hard for me physically and emotionally at the end of pregnancy. I was proud of how far along I was when I went for my last run – 31 weeks. I would go for a run (ok, ok a very slow jog), usually before work 3-5 times per week, getting my 3 miles done in 35 minutes or so.

When I was hospitalized at 34 weeks, I had to be on the monitor 23 hours a day and wasn’t supposed to leave the hospital, so I was limited in my exercise ability. I settled for a mini-bootcamp with an exercise band and medicine ball I had gotten as gifts.

After Mabel was born, I knew I needed exercise. We commonly tell patients, no real exercise until 6 weeks postpartum. I used to tell my patients that they could do some light exercise, like walking, when their bleeding stopped. I did not take my own advice. I was doing yoga at 10 days postpartum and back at bootcamp (with modifications and accompanied by my midwife) at 2.5 weeks. I will now counsel patients differently.

But even before I started back at bootcamp, I would walk. Chris and I would hit up the local “rail trail” (and old railroad track converted into a paved path frequented by walkers and cyclists). It was winter and our area had been hit by an enormous amount of snowfall, so rather than brave the sidewalk-less streets in our country-living town, we would bundle up and head to the rail trail nearby. Our town plowed a mile and a half of it in the winter, so it was a safe place to walk and get fresh air. At first the walking was slow going, but as the days progressed, I could do more faster. I was limited mostly by my pelvis. There is a bone- the symphasis pubis- in the front part of the pelvis (the pubic bone in more common terms) that has a joint in it. In pregnancy, the body makes a hormone called relaxin, which, as its name implies, relaxes the joints in the body. Its main target is the pelvis, loosening the hinges to make more room for a baby to pass through. Many pregnant women speak of loose joints that sometimes can be painful and that’s due to the relaxin, which works on all the joints- not just the pelvis. 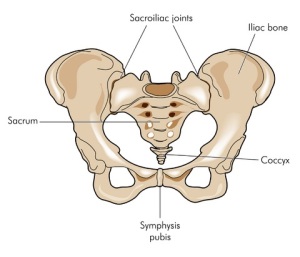 My body made plenty of relaxin. As pregnancy progressed, I would be sore after a run. I’d feel it in my pelvis, my symphasis mostly. I remember vowing the day after the Thanksgiving turkey trot we ran that I was done running- my pelvis ached! I’d need a little assistance getting off the couch and climbing stairs would smart. I’d ice, stretch and see the chiropractor, but nothing really helped. So eventually I gave up running and moved on to bootcamp. After Mabel was born and we were walking I felt that familiar burning, lingering pain in my symphasis. I wasn’t worried; it can take time to heal. I eventually worked myself up from walking to interval jogging to my usual three-mile stint at a slow pace. Week after week I’d keep at it, slow and steady as I regained my stamina. Though I gave it time, my pelvis seemed stationary in its healing process. I continued the stretching, ice and the chiropractor but found myself running less and going to bootcamp more. I think I’ve run once in the past two months.

I finally made an appointment with physical therapy to try to get some help, but part of me realizes that my jogging days might be over. I am well past a reasonable recovery time and have come to accept that this might be one of my battle scars. I was fortunate to never get a stretchmark in pregnancy- the only few I have developed on my breasts during the rapid and impressive engorgement I experienced a few days after birth. The shape of them have changed too. Other than that, I have few physical reminders that my body once bore a baby.

Part of me hates the loss of running due to my invisible battle wound on my pelvis, but part of me thinks of it fondly. Just like the milk that came in so insistently after Mabel was born, my painful pelvis is a reminder that though there is no baby, there was a baby.

What about you- what are your battle scars? Are they public or invisible? How do you feel about them?

Today is a special day, a little girl named Calla was born two years ago today. I’ve never met her.  I didn’t know her mom or her dad or her two big brothers when she was born.  I only know them now because Calla Pearl was born sleeping.  Though I wish that weren’t the case and she were a lively two year old sapping her mom’s energy, I am grateful that I have met Calla’s mom and her family.  Today I tried to picture what I think she would have looked like as a two year old.  I base my vision on the precious photo her mom showed me and how her two older brothers look.  But I know she is and ever will be the baby born too soon and too silent.  I think of Calla being a friend to Mabel, showing her how to be a baby separated from her mother, in the way Calla’s mom is helping show me how to be a mother separated from her baby.

parenting and processing after infertility and babyloss

Healing grief over loved ones who are gone, but forever in our hearts

In Quest of a Binky Moongee

Puzzled by the Pieces

Putting it all together

For Mothers who have lost children....mrsjschell@gmail.com

learning to live without our Annaleigh

'How lucky I am to have something that makes saying goodbye so hard.'

The Boy Who Never Lived

Out to find the miscarriage and loss resources and hope for ourselves and those who follow us, with the knowledge that we Will CarryOn.

Mother of All Things

Parenting outside the box

The Art and Craft of Blogging

learning how to be the mom of an angel