Thursday night I tossed and turned.  I woke up many times with a backache and abdominal pain that made me breathe and moan a little.  I figured it was gas (my chicken shawarma sandwich the night before did smell a little funky to me) and typical hospital bed associated back pain.  So in the morning I got up and tried a few things to help with my back.  I used my trusty rice pack- a homemade cloth bag filled with rice that I microwave so that it acts like a hot pack.  It helped a little.  I tried some stretches my chiropractor had recommended for lower back pain.  It helped a little.  I started aggressively hydrating- maybe I was dehydrated, which can cause cramping. Finally I decided to do a full on yoga session- which really gives me a good stretch.

My high risk doctor came in the middle of my yoga, so I stopped and we had a nice donut break.  I told her that I wondered if I maybe had some Braxton Hicks overnight.  That or gas.  I apparently was really stuck on the idea that it was gas pain.  We laughed, had some munchkins, and I went back to yoga.  I took a hot shower and notice what might have been the tiniest bit of bloody show.  I became a little worried- wondering if my body could actually be doing something.  I wasn’t ready!  We had just come up with a new plan- since the baby had been doing so well, we were going to let me stay pregnant until 39 weeks.  I had started telling work and family about the new plan- and was really quite excited.  I knew that meant two more weeks in the hospital, but if there was any benefit to the baby I’d do it.

In the shower, as I put the pieces together- the cramping and backache I was feeling plus maybe some show- I got nervous.  I had a little cry and told the baby the words I had told her after my CVS.  Stay, baby, stay.  When I put myself back on the monitor and adjusted the belts, I could see I was actually contracting, every few minutes.  They weren’t strong, but they were there.  I ordered lunch- I wasn’t particularly hungry (the donuts from my doctor did that), but on the off chance that these contractions really meant something, I knew I needed some energy.  And I really pounded the water.  Over the course of the day I drank 4-5 liters.  After seeing what looked more conclusively like bloody show- I called Chris at work.  I told him what was going on- I was contracting but I wasn’t in actual labor and maybe he should come straight here after work rather than running home and getting take out (it was Valentine’s Day- we had a nice hospital date planned).  He suggested I let my midwife know.  I debated, because I knew I wasn’t in actual labor, but this was something very new.  I had such an easy physical pregnancy, having this pop up was so unusual.  Also, I had been watching how the baby was doing on the monitor with the contractions.  We all expected the baby to have some dips or distress with contractions because of the lack of fluid.  My baby, per usual, was awesome.  Clueless that anything was happening.  I figured I could tell my midwife that, if nothing else.

So I called her up- told her I’m having some mild contractions, that I’m not in atcual labor (she could tell that just by listening to me), that I had some bloody show and that the baby was tolerating it all fine.  I cried to her on the phone, telling her “I’m not ready.”  She assured me that many women contract at 36 weeks, and the show can be normal too.  It doesn’t mean the baby is coming.  All things I knew, but it’s hard to be your own midwife and it helps so much to hear it from someone else.  We agreed that she would come by that evening after she was done in the office.  I can’t remember exactly what I did to pass the time- I think I watched a documentary, texted a bit with some family.  I might have mentioned that I was having some Braxton hicks, but no big deal.  I started feeling better- contracting less.  So I even told Chris to go home after work, get what he needed and pick up the take out we were planning- sushi!  (cooked rolls).  Also, we had ordered a baby blanket, which was at home and I thought, just in case, we should bring it in.  While he was off doing that, my midwife came and I was still feeling a bit better.  I think I had one or two contractions in the 30 minutes she was there.  We decided not to check me.  I say “we decided” because it really was a joint decision- we talked about how would I feel mentally if I knew I was dilated.  Since I clearly wasn’t in active labor, knowing how dilated I was wouldn’t change anything, except maybe worry me.  Our plan was wait and see and for me to take an ambien that night for sleep.   Later she told me she thought this was the early stages of labor, but figured the excitement would start later that weekend.  I on the other hand, was still in some sort of labor denial.  She didn’t check me, so clearly I’m not in labor.  We can go back to normal.

Chris arrived and we had us a nice date- ate our sushi.  We planned on watching the new season of House of Cards.  But first I wanted ice cream.   My contractions had started back up- but still mild and I kind of wanted to go for walk.  I hadn’t really been off the monitor that day yet and walking would be a little test.  As a midwife, I often send people walking when they are in early labor to see their contractions get worse while walking and better with rest.  So we walked to the lobby and got a pint of Ben & Jerry’s Peanut Butter Cup ice cream and walked back.  Back in the room, resting, my contractions did not get better; they became a little worse (stronger, more frequent).  In my labor denial I continued to eat my ice cream trying to ignore it all.  I wasn’t ready for this baby to come. I had just got my head around a 39 week delivery. I had barely started my hypnobirthing CDs.  36 weeks felt too early!  And as much as I wanted to know what would happen with my baby, there is some comfort in uncertainty- there is still hope.

But babies come on their own schedule.

As things picked up, I became more uncomfortable.  I found myself on hands and knees in the bed (a common laboring position).  I was breathing and moaning pretty consistently through them- every 2-5 minutes.  I told Chris tearfully between contractions “I’m not ready.”  My nurse came in, saw what was happening and tried to assess my pain level.  I called them a 4-5/10 and she gave me a look of: really? Because you look more uncomfortable than that!  But I have never really had pain before, I’ve seen people in transition and seen what a 10/10 and I knew this would get far worse.  She asked if she should call D, my midwife.  I hemmed and hawed over it- I didn’t want to call too early, but I could see the nurse was concerned.  So I told her to call my midwife, update her and see if she wanted to talk to me.  (of course she did).  So as I was on the phone with her, I explained things picked up and I think this might be the start of labor. I told her I wouldn’t have called her if I were at home- I would have gotten in the shower, but since I’m tethered to the monitor (which was bothering me a bit), I didn’t know what to do.  I felt like when I was on the phone with her, I could suddenly talk through my contractions (I hadn’t been able to before), so I was afraid I was jumping the gun.   I think she was surprised to hear from me so soon- I had seen her only hours before and was fine.   But she asked if I wanted her to come in “I don’t want to cry wolf.  I don’t want to be a fingertip!” (A fingertip means I’d be ½ cm dilated- very very early and in my head would be embarrassing as a midwife)  But ultimately, yes, I wanted her to come in. 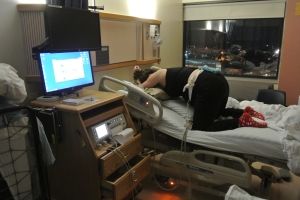 I remember Chris saying “I’m not sure you’re going to like me doing this,” as he reached for the camera. Very glad he did.

I’m glad she did.  I joked with her later that she was a human tocolytic (contraction stopper)- when she came or called my contractions were less.  When she wasn’t there, they were worse.  In the time in took for her to get there, things ramped up more.  I couldn’t sit down- I had to stand or be in hands and knees. I was moaning consistently through my contractions. I vomited up the sushi and peanut butter ice cream.  I think I was beginning to realize that this might be the real deal.  When my midwife arrived, she checked me and I was 4cm/80%/-1.  I was entering active labor.  The good news was: I didn’t cry wolf, I wasn’t a fingertip, and I could be transferred to the labor floor- where they were better equipped to help someone in labor (and I could get in the shower with their portable monitors).  The bad news was: the baby was coming and I wasn’t ready.  I was so so scared.