When I found out I was pregnant, I planned to announce it on facebook after the first trimester and six months later announce the birth.  When I was trying to get pregnant, hearing all the details of others’ pregnancies on facebook made me a little sad and jealous. And I didn’t even have to try that long!  I could only imagine how some others felt who were trying longer.  So I vowed to myself to limit how much I posted.  When the baby was diagnosed with Down Syndrome, I held to that vow.  I didn’t want any pity regarding the diagnosis because, though it was an adjustment, I was still happy ifnot a little worried to be pregnant.  So we announced just the pregnancy at about 15 weeks- on our 1 year wedding anniversary- with a wedding photo/birth announcement I had planned ahead.  I’m a planner. I didn’t know when I’d be pregnant but I thought a cute wedding photo pregnancy announcement could be handy. 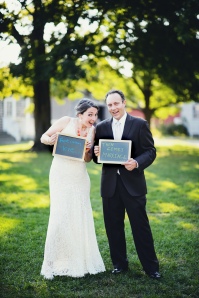 Outside of facebook, I told many people about the Down Syndrome: anyone who I’m close to or if it came up, I was very open.  I wasn’t hiding anything,  I have a large extended network on facebook and they would find out soon enough.

I had a plan- I was going to announce the birth of our child who just happened to have Down Syndrome on facebook in a special way.  I would play with the announcement in my head and knew eventually I would work on something concrete as we got closer.  It made me happy to think about.  It would go something like this [I chose “he” as the pronoun just because- not because I know anything]:

Today [insert name] joined us in the world.  He is perfect in every way.  Six months ago we learned that he would have Down Syndrome and welcomed him and all he would be.  He has [Insert health issues], so keep him in your thoughts and join us in celebrating his long awaited birth!

It was such a nice idea.  So simple.  Back when things were uncomplicated.  When I was diagnosed with oligohydramnios and the prognosis became poor, my plan didn’t change right away.  But soon there was a lot of updating to do.  Every ultrasound, every meeting with experts, I was reviewing with family and friends over the phone.  I didn’t mind talking about it at all (it became my reality) but it was just so time consuming.  So I decided to make my blog public- it was terrifying and a relief at the same time.  I have never been a writer and felt very self-conscious about my writing.  And I worried that people might find it dark or me too negative.  But I have been so pleasantly surprised by the support and love I’ve felt going public.

I wonder now what and how I will announce things on social media.  I will celebrate my baby’s birth in some way on facebook just like I would have before all the complications.  My baby deserves that.  I just wonder what I’ll be announcing.  So much uncertainty. So much unknown.